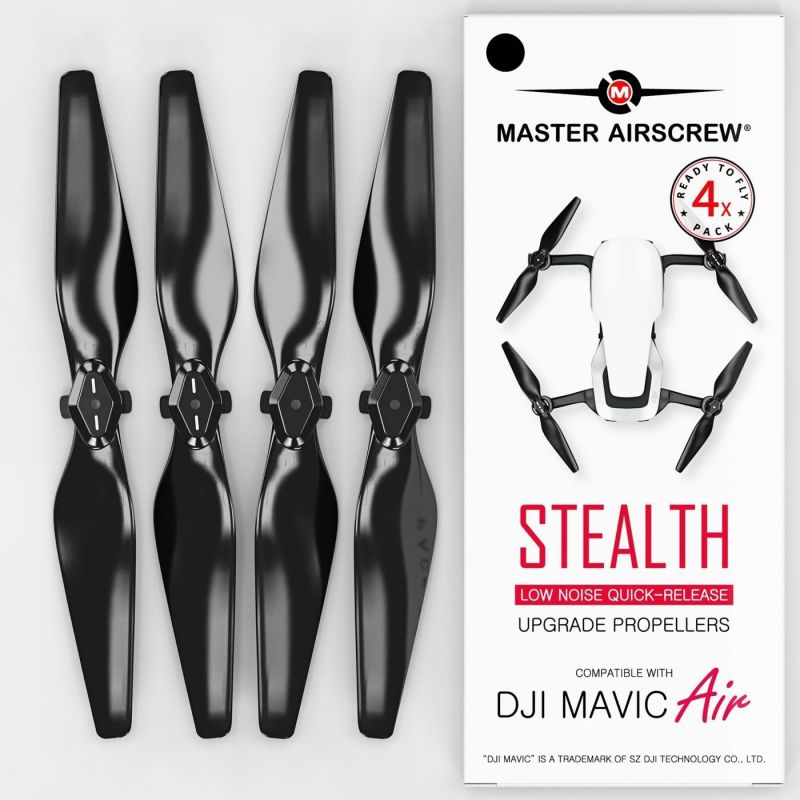 Enhanced efficiency - by up to 14% compared to DJI OEM propellers. Get up to 2.8 min of extra flight time for those best shots you aim for. *Performance may vary depending on flight conditions.

"Quick-release" color coded propellers allow you to change the props within seconds. Special care has been taken for full portability and compatibility with all existing DJI Mavic Air accessories.

What's included in the box?

All Mavic Air STEALTH propellers manufactured and shipped after 23rd of May 2019 are Second Generation(v2).

How to confirm? - each propeller is engraved with "V2" on the bottom of the blade near the propeller hub.

"Motor current error" - How to fix?

A limited number of Mavic Air units started experiencing "Motor Current Error" following DJI firmware upgrade V01.00.0560. To fix this, please follow the recommended settings here: https://www.masterairscrew.com/MAir  This error is harmless to your drone, but can be annoying if showing frequently. If the issue persist, please contact us here.

The Second Generation (V2) Mavic Air STEALTH propellers does not experience any motor or other errors with any DJI firmware or flight mode.

We are one of the few Model Airplane and Drone manufacturers actually located in the US. Our manufacturing facility is located in Rancho Cordova, California.

How do you achieve low-noise operation?

How do you achieve longer flight time?

It's all about efficiency. Our team has more than 40 years of experience designing and manufacturing propellers for Model Airplanes and Drones. We have designed the Mavic Air propellers carefully selecting the perfect airfoils and propeller geometry for this drone. As a result, the Stealth propellers have better efficiency and drain less power during flight allowing additional about 14% (up to 2.8min) of flight time per battery.

Are the MAS Mavic Air Propellers a direct replacement to the stock DJI propellers?

Yes, our Mavic Air STEALTH Upgrade Propellers are engineered to be a direct replacement of the stock DJI propellers and further enhance your drone capabilities.

How many propellers are in one set?

Why the STEALTH Mavic Air Propellers have glossy surface?

For efficiency and performance purposes. Smooth and even surfaces decrease drag and improve propeller efficiency.